On the fifth Friday of a month an outing is arranged and details are announced at the regular meetings.

U3A North Coast remained active throughout 2020 and completed our programme of activities although COVID19 restrictions meant that, for a while, some online meeting were held with successful presentations using ZOOM.

New members are welcome.  Existing members are reminded to renew their subscription before the end of January.

We have an exciting programme of weekly group meetings and other activities for 2021.  Click on the program below for details.

U3A North Coast regular activities were scheduled to recommence on 5 February 2021 with Dr Craig Challen, SC, OAM and joint Australian Of The Year 2019, to speak about the risks and problems encountered in performing the amazing Thai Cave Rescue which received world-wide publicity.  Sadly Covid19 restrictions caused the postponement of Dr Challen’s Talk and the re-introduction of online Zoom meetings. Peter Flanigan’s fascinating Zoom Talk on ‘Viruses’ was both timely and informative.  There are many types of virus which are incredibly minute and some are dangerous to humans.

The current pandemic is caused by a novel coronavirus, named ‘Severe Acute Respiratory Syndrome coronavirus 2 (SARS-CoV-2)’, which was identified as the cause of an outbreak of respiratory illness first detected in Wuhan, China in 2019.  That illness has been renamed ‘COVID-19’ for coronavirus disease 2019.  This illustration reveals the structure of a coronavirus when viewed through an electron microscope.

In a separate Zoom session, U3A North Coast members were encouraged to wear a Silly Hat and speak for 5 minutes on any subject of their choice – including telling jokes.  It was an entertaining session.  With the lifting of restrictions, group meetings in the hall will recommence from 19 February with ‘Overcoming Stuttering’ by Geoff Martin to be followed, on 26 February, by Ian Stann’s presentation of ‘What If Switzerland Ran Australia?’ 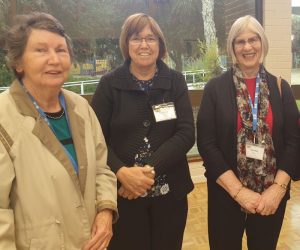 North Coast recently rolled out the red carpet for visiting U3A President Denise Beer – with a sumptuous afternoon tea following three special presentations. North Coast Chair Dee Tartt took her audience on a musical journey through the ages, while Nigel Ridgway reminisced about his childhood in Jordan, with a keen insight into the turbulent history of Israel and the Middle East. A surprise addition to the program was a presentation by young musician Michelle Ezzy who enthused about her latest project, working with young performers producing filmed stage productions. 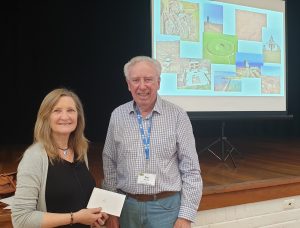 Dr Pam Lynch is an archaeologist, passionate about her subject. Picture shows North Coast’s Don Manning congratulating Pam on her presentation, “walking through history” which has also been enjoyed by Joondalup Region. Pam’s talk focusses on the Orkneys, a tiny cluster of islands just 16 kilometres off NE Scotland – site of one of the world’s best preserved and enlightening examples of prehistoric (Neolithic) architecture. 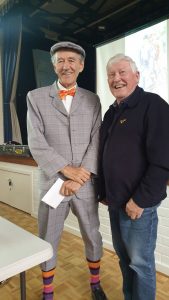 Sails and wheels….North Coast yachting personality Nigel Ridgway (right) compares notes with Alan Naber, who rhapsodised about bicycles when presenting “A Social History of Cycling”. He posed a number of tantalising questions, including:

Smartly attired in cycling gear from a bygone era, Alan highlighted the development of cycling from 1817 to the 1920s and its profound influence on society.

Dulcet Tones of the Dulcimer 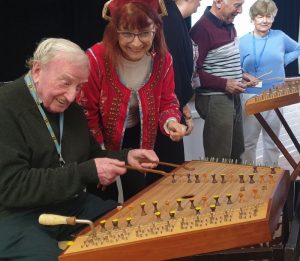 Peter Alcock intrigued and entertained North Coast (Hamersley) colleagues with the history and musical quality of a little known string instrument, the dulcimer. He was accompanied by dulcimer exponent, Christine Hogan from Mad Tatters, pictured instructing Peter Flanigan to have a go at making music with the tiny hammers used on the strings.

Elton Brown is a former engineer who has devoted his retirement years to the study of medieval history – which he enjoys sharing with the U3A Regions. His repertoire ranges from a Chaucer rogues’ gallery to European monarchy and folklore stories for children. His North Coast (Hamersley) audience were invited to revisit the traditional nursery story of Dick Whittington and his cat and discovered that: 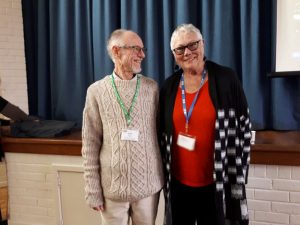 Talks Coordinator Terry Harvey (who is himself a popular presenter with U3A Regions) said he was thrilled to find an exciting new talent among North Coast’s recent surge of new members.  He was referring to Paul Fisher (pictured at right with Elizabeth Brennan) who gave a stellar performance unlocking the mysteries and complexities of astrophysics.

A retired engineer responsible for the design and planning of Perth’s major highways as well as the northern railway, Paul spoke with authority and humour, describing the different types of stars, and how each goes through its life cycle; how some stars end their life with a whimper and some with a bang and how the death of stars gives new life to the universe. 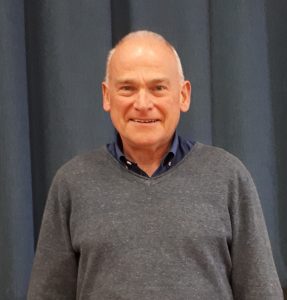 One of U3A’s most popular speakers, Richard Offen, treated North Coasters to two versions of his presentation, “The History of Perth Theatres and Cinemas”  — the first on Zoom during the Covid closure; the second to an enthusiastic Hamersley audience of around 70 members and visitors. The presentation followed the rise and decline of Perth’s favourite entertainment venues, from 1853, when a travelling salesman gave a magic lantern show in a tent.  Much loved but almost forgotten Colonial theatre sites included:

Richard well known as a historian, author and broadcaster, brought many of those old favourites back to life. As a connoisseur of international theatre, he also paid homage to two of his personal favourites: Perth’s irrepressible His Majesty’s and the unique Quarry Amphitheatre in our Western suburbs. 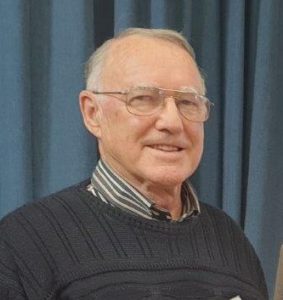 Ric Foster recently took fellow North Coasters on a historical armchair journey through WA’s Great Southern…..home of his pioneering family. He described the rapid growth in the late 19th Century of the rail network linking Albany to the existing rail system at Perth and Fremantle.  As surveyor general, the renowned visionary, explorer and statesman, John Forrest, oversaw a land grant scheme which financed railway infrastructure and opened up the region to agriculture. 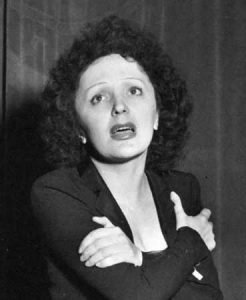 North Coast held its first post-lockdown Music Appreciation session with a musical journey through the tempestuous life of Edith Piaf. Pauline Yarwood traced the French singer’s rags to riches story, from her abandonment at birth and early childhood in her grand mother’s brothel, to her meteoric rise as a teenager, from street singer to international cabaret star. During her short life, impacted by two world wars, multiple lovers and espionage, Piaf produced a repertoire which included numerous classics still popular today……among them her signature song La Vie En Rose, The Poor People of Paris and the timeless Milord. 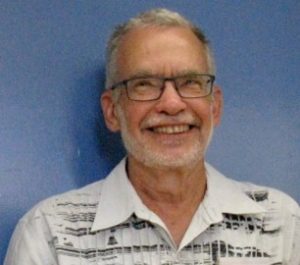 Graham Ezzy is North Coast’s fourth current member to train as an official Rottnest Island Guide, joining Peter Alcock, Nigel Ridgway and Peter Merrells. Graham recently shared his passion for Rottnest Aboriginal history with a presentation titled “When Worlds Collide –Rottnest Island:1829 to 1931.” His presentation examined the many “difficulties” between white settlers and Aborigines that were evident from the beginnings of the Swan River Colony.  Many Aborigines were apprehended for infringements of imposed British laws, having difficulty understanding these laws and the reasons for their imprisonment.

Looking back on a sensational career in politics, former Premier Brian Burke was happy to share his recollections – both good and bad – with members of North Coast U3A. From his electoral win to the Premiership at the age of 35 to his year in year in jail (for travel allowance irregularities) he told it all – with the warmth, humour and candour reminiscent of his time at the top in the 1980s. What would he have done differently in his political career?  “Everything,” he replied. However, there were many solid achievements during his five years as premier. The one he was most proud of? “Undoubtedly, the abolition of capital punishment.” After a career as a journalist, Brian Burke, entered politics in 1973 as a 26 year old. Six years later he became leader of the opposition and in 1983 he lead the Labor Party to victory and became premier.  It was an exciting time in WA with a mining boom taking place and the local economy growing at twice the rate of the rest of the nation. He had promised his wife, Sue, that he would spend only five years in the top job, therefore, on his 41st birthday, he announced his resignation. Sue, his wife of 55 years, accompanied the former Premier to North Coast’s Hamersley venue. The couple have raised six children and now take pride in 25 grandchildren.

David Hounsome, popular around U3A regions for his presentations on modern art, is now focusing on another of his passions: indigenous art. North Coast Hamersley U3A were treated to his debut presentation of Aboriginal Art from Cave to Canvas with a wealth of art images depicted on rocks, sand and bark to blank doors, blank walls and canvas. The images are mainly from the Art Gallery of WA and from David’s own photographic expeditions to the Kimberley. He showed how Aboriginal art has evolved from cultural practice, varying widely among the different indigenous nations and language groups, to modern artists’ cooperatives springing up and flourishing throughout remote Australia. Charting progress from prehistoric cave paintings to modern canvases hanging in the world’s leading art galleries, David detailed the impact of history, especially colonial settlement, on indigenous art.  He cited the discovery of artistic talent among stolen generations (as at Carrolup, near Katanning) and displaced indigenous persons at institutions like Pupanya (Northern Territory) which produced  Clifford Possum Tjapaltjarri and Mick Namarari Tjapaltjarri who were  Australia’s most internationally acclaimed indigenous artists. North Coasters were reminded of the tragic lives which overshadowed many successful indigenous artists……foremost among them Albert Namatjira, internationally recognised, presented to the Queen, but dying an untimely death following discriminatory imprisonment in the 1950s. This irony is vibrantly depicted by Perth artist Sally Morgan in her picture, Greetings from Rottnest, ……a reminder that the island seen by most as the ultimate pleasure destination was a source of misery and despair for the thousands of Aboriginal men and boys incarcerated there in previous centuries.

Map:  Hover mouse over icon for description of address and to Get Directions.