Welcome to the Rockingham page

Meeting Place: Meetings are held at the Masonic Hall, Wanliss Street, Rockingham, on the first and third Fridays of the month.

“We set out from Rocky on a morning fine and dry” – well that’s how the song goes but we set out on a morning windy, cold and wet with our destination “The Ravo” aka Ravenswood Hotel for a Christmas in July lunch. We bundled ourselves into five cars, communicating departure and ride sharing by mobile phone as we weren’t venturing outside.

The venue reached uneventfully was found to be very cosy and our tables decorated to suit the Christmas theme. Much laughter and talking was followed by a very nice three course lunch. During lunch Valerie Buckley surprised us with a lucky draw with 4 prizes to be won. I was lucky and my number came out first – I was delighted to win a pair of cat socks. Cats are my favourite animal so it was a perfect gift for me to receive. Thank you, Valerie.

Our outing was organised by John Macdonald but unfortunately John and Lyn got caught up in the ongoing Covid Saga and had to quarantine when returning from S.A – consequently, after doing the ground work for the trip, John and Lyn missed out. Our thanks to Felicja who filled the breach and finalised the arrangements and was our host for the day.                       Colleen Hardie

Tonga, Norway and India – a travel photographer’s perspective – 7 May

From the Himalayas in India to beneath the oceans to the Aurora Borealis in Norway, Tammy Gibb described her love for underwater and terrestrial photography, and how her passion for photography drove her to become a qualified scuba diver, just so she could get those photos!  Starting with a small hand-held camera in a waterproof casing, and over the years progressing to a heavy huge monster with a fisheye lens and two underwater flood lights that needed two hands just to hold it, even underwater, she captured incredible images of rarely seen marine events!  Her adventurous spirit also took her to the highest mountains in India, and the freezing countryside in Norway.

Duyfken – Exploration, Wars and Spices –  21 May

Roy Stall, a maritime man of many talents, consultant, heritage guide, teacher of maritime English and entertaining presenter, described to Rockingham members the role of the tiny  scout ship “Duyfken” in the spice trade from Europe to the Dutch East Indies during the early 17th century, and of its link to very early Australian history.  He also described how a perfect replica of this “Little Dove” was built in Fremantle between 1997 and 1999.  His presentation was beautifully illustrated with many excellent photos taken during the construction.

Our very own John Macdonald mesmerises a full house!

On April 16, John delivered an astonishingly detailed history lesson on an iconic Scottish battle – the Battle of Culloden – fought on this very day in 1746!  His reputation for depth of knowledge on this topic attracted people from the wider Rockingham area (many were not U3A members) to the point the meeting hall was filled to capacity!  For well over an hour, John held the audience captive.  The many questions were answered promptly and comprehensively by John, and this continued during the afternoon tea that followed.  There was much spirited conversation for the rest of the afternoon, and people left still highly animated after such a talk!

A brief explanation of what caused all the excitement – the Battle of Culloden was the final confrontation of the Jacobite rising of 1745.  On 16 April 1746, the Jacobite army of Charles Edward Stuart was decisively defeated by a British government force under William Augustus, Duke of Cumberland, on Drummossie Moor near Inverness in the Scottish Highlands. 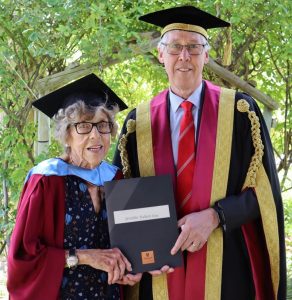 The Chancellor of Murdoch University, Mr Gary Smith, travelled to Jennie’s home in Shoalwater to confer her latest degree.  At 81 years old, Jennie was unable to attend a regular graduation ceremony at RAC Arena.  She was awarded a Bachelor of Arts in Indigenous Studies, adding to her previous Bachelor of Nursing and post-graduate studies in Clinical Nursing.  Dignitaries who attended included Professor Andrew Taggart, a stalwart of Murdoch and strong supporter of U3A, the deputy mayor of Rockingham, Deb Hamblin, U3A members from Rockingham region, the local newspaper, and many members of Jennie’s family.  It was a truly very special day.

Once again Professor Bob Mead travelled to Rockingham and demonstrated to members his investigative powers. By combining all his skills in forensic detective work, which are prodigious, he utilised modern DNA knowledge and successfully identified the perpetrator of a crime that took place several decades earlier.  One small DNA sample enabled Bob to build a family tree going back in time to common great, great, (great?) grandparents, then build it down another “side” until he eventually arrived at a person who he identified as the cold case killer.  His conclusion matched the official investigation.   Questions came thick and fast at the close of his amazing story!

David is well-known to Rockingham audiences and his eloquent delivery of this engrossing topic clearly captured the interest of members.  He explained that with no written indigenous language, art was the descriptor.  Aboriginal people painted spiritual things or things that represented their stories.  European artists did not do this.  David illustrated his talk with some beautiful examples of Aboriginal art.

Building the Roman Baths at Caracalla

After a slight hiccup, Rockingham Region recommenced its 2021 fortnightly meetings with a visit from Professor David Kennedy from UWA .  David caused the audience to gasp in  absolute astonishment when he described the enormously complex task of building these Roman baths. The baths were more a leisure centre than just a series of baths.  The population used the complex buildings for bathing, exercise, recreation, socialising, entertainment, health education, dining, art display and worship. The series of buildings that make up the bath complex covers 11 hectares, took 9000 workers 5 years to build, over 4 levels with 3 terraces.

Rockingham Region celebrated a very successful year with a sumptuous Christmas lunch, provided by Colleen and David.  They slaved away in the kitchen prior to the day, and on the day, and set out a magnificent feast suitable for a king!  Not only was the food magnificent, but the tables were individually set for about 6-8 places, decorated and laden with chocolates, nuts, punch, and U3A placemats!  Food included ham, turkey and an array of vegetables not often seen at a dinner, with all the accompaniments!  Dessert was a choice of plum pudding with custard or trifle.  There was plenty of food for those who wanted to visit the tables more than once!  Bubbles and still wine were also part of the feast.  It was an intimate lunch and members mingled and chatted all afternoon. 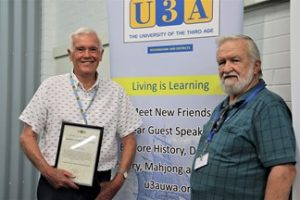 On 20 November 2020 David Phillips was presented with his Certificate of Appreciation as he was unable to attend the (non) AGM.  David was recognised for his long service (20+ years) to U3A in many and varied capacities.  His achievement was warmly acknowledge by the members.

How can anyone predict the future 10 years ahead?  Brian Greedy set the context with many facts from the past and present to paint a picture of how change occurs, and how it can defy predictions.  His lively and often humorous presentation included some alarming predictions – world population will be 9-10 billion b 2025 with 1.5 billion people living in slums; in the near future, diesel fuel will be banned and by 2025 it will be cheaper to buy an electric car than a petrol-fuelled car.  His presentation included so much more and left the audience with much to think about.

The Wonders of Water

On 6 November, Dee Tartt presented a fascinating story on The Wonders of Water.  If you did not know anything about water other than it is a liquid you drink, then after her talk, you would have been amazed at the almost unlimited properties of this clear, odourless substance.  For instance, it is the only substance that exists naturally in its three states, ie, solid (ice), liquid (water) and gas (steam).  Other interesting facts include: it refracts and reflects, it sticks and repels, it has a surface skin and it is the best solvent!

Guest speaker Ian Deany – A Journey down the Canals of Europe

Ian’s presentation of a very leisurely journey down the canals of Europe in his purpose-built boat was beautifully illustrated with many photos and a very informative commentary.  He and his wife lived life in the slow lane while enjoying numerous and unusual perspectives not often experienced by visitors to this part of the world, unless they did so by way of the thousands of kilometres of canals. Many families live permanently on the canals, and to accommodate the children’s activities, some barges are made into permanent sandpits for children to play in, as long as they wear life jackets when they play!

Music, Evolution and Harmony for the Soul

Emeritus Professor Alan Harvey took the audience through a stimulating precis of his book “Music, Evolution and Harmony for the Soul.”  He touched on so many things, from pre homo sapiens to modern man, pointed out that music and rhythm is present in all cultures, highlighted the commonalities and differences between language and music, and so much more.  He answered one huge question for me – why do I get teary when I hear certain music?  Now we know!

On 21 August, Rockingham members were challenged by the presentation of Greg Watson, who is employed by the Red Cross and lectures at Curtin University.  He delivered a very thoughtful presentation entitled “Migrant Support Program” in which he put a series of questions to the audience to demonstrate the difficulties refugees experience when deciding what to do when contemplating leaving their own country.   It was a non-judgemental presentation, but highlighted the dilemmas faced by displaced persons.

Our guest speaker on August 7th was Lisa Billingham, Clinical Hypnotherapist and Psychotherapist.  Her informative and interesting talk assisted our understanding of hypnosis, and provided an insight into the benefits of hypnotherapy to assist in the treatment of many medical and psychological conditions such as anxiety, phobias and eating disorders.

Rockingham Region held it’s first post covid  meeting on July 3rd. Our speaker, Anthony Alborn, gave an interesting presentation on the history of newspapers.
At the meeting our secretary Colleen, pictured below with chairman Terry, was presented with a floral arrangement in thanks and appreciation for the wonderful work she had done throughout  the lockdown to support members and then to ensure all aspects were covered for the safe resumption of activities.
Prev
Next 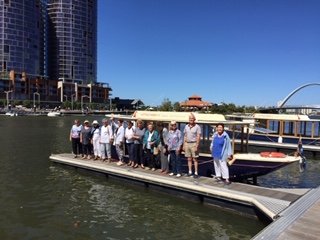 On Friday 29 March members of Rockingham and Districts had an outing to Optus Stadium. The day began with a coffee at Elizabeth Quay before boarding a small electric ferry for a short cruise to the stadium. Along the way our skipper pointed out places of interest and some of their history. The weather was almost perfect and as there was no sound from the engines our trip was very peaceful and calm. Approaching Optus Stadium we sailed under the Matagarup Bridge which provides pedestrian access across the river to the stadium. The bridge’s structural shape which could be two flying swans, complete with wishbones, a Wagyl serpent or a ribbon, and the striking black and white colour is such an impressive sight.  The stadium situated on the banks of the river and surrounded by beautiful walks and garden is also quite stunning. Walking around the stadium on the tour we discovered the state of the art sporting and high tech facilities. Players and staff, patrons and broadcasters, had all been considered in the design of the stadium.

It was such an enjoyable experience being able to see all the behind the scenes features as well as have breathtaking views of both the Swan River and city from the highest part of the stadium.