Welcome to the Wanneroo page

Meetings are held at 12.45pm on the 2nd and 4th Thursday of each month (excluding December) at the Wanneroo Recreation Centre, 275 Scenic Drive Wanneroo.

Fun and Games at Wanneroo

What does U3A Wanneroo have up it’s sleeve for it’s Fun and Games on Thursday 19th of January?  It looks like fun! 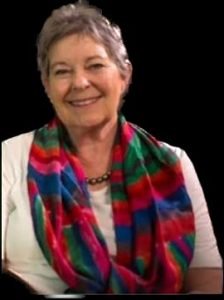 Sue Boyd was the 1st speaker at Wanneroo U3A in 2023 on the 12th of January.  Sue gave a brief history of her life growing up in the UK and WA and how she became a diplomat.  The presentation was entertaining and informative, full of humorous accounts of her career as a diplomat.  Sue wrote a book “Not Always Diplomatic – An Australian Woman’s Journey through International Affairs” that may be borrowed from WA libraries.

A Trip to York and Beverley

Just over 30 U3A members and friends boarded a bus to venture into the hills and visit the historic towns of York and Beverley. The weather was kind to us and our first stop was on the banks of the Avon River where we tucked into some morning tea.  We then invaded this town of York where we checked out the quaint little shops and school, before heading onto  the town of Beverley to have lunch at the Freemasons Pub.  No complaints here about the food and service. Our return journey was interrupted by loud snoring by some passengers, but there were no speeding fines, flat tyres, broken windscreens or unpleasant smells. 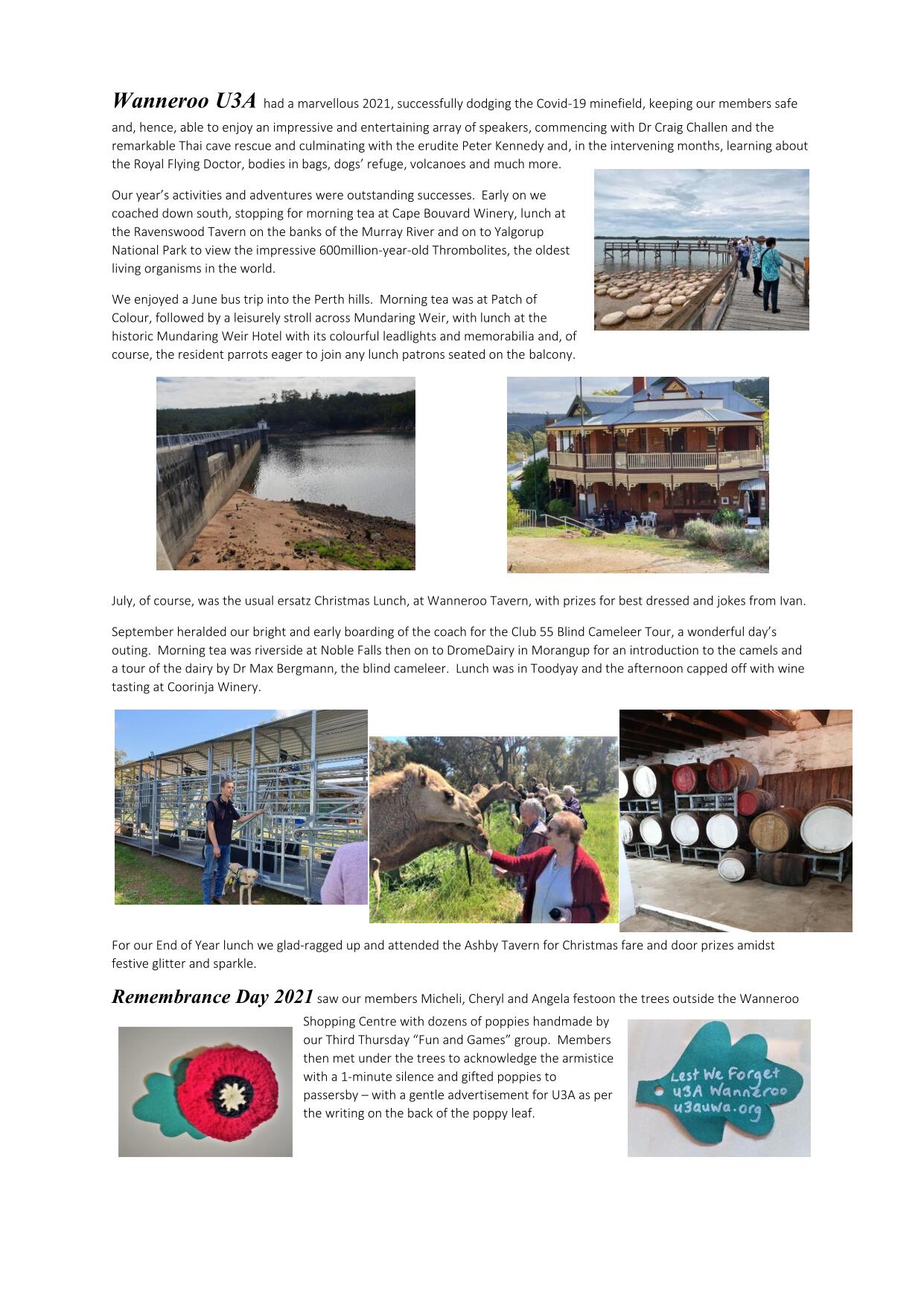 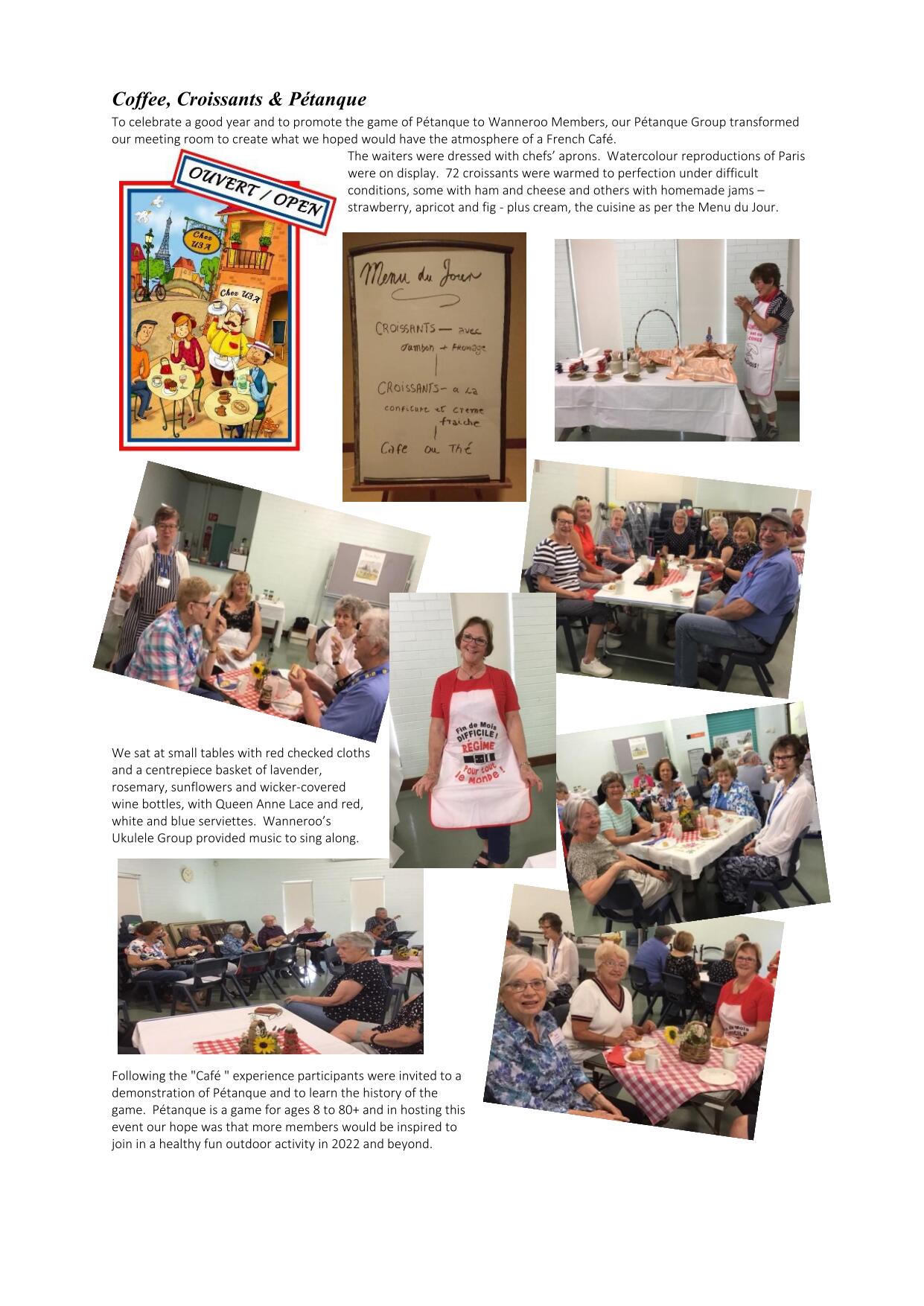 Wanneroo End of Year lunch was enjoyed by all at Ashby Tavern. Wanneroo U3A has its annual break in December and starts again in January 2022.    Click HERE to view photos

The Wanneroo petanque group held an end-of-year French themed morning tea with croissants. It included light entertainment with the ukulele players and was followed by a demonstration of, and tuition in Petanque.

On Wednesday 2nd June, 33 adventurers from Wanneroo U3A enjoyed a bus trip to Mundaring Weir. (C Y O’Connor was some great engineer).  The local Hotel provided us with a yummy lunch,  and mouth watering Rocky Road to follow. (All slimming, of course).  This was an outing that will well be remembered.

A fantastic day was had by all who attended the U3A picnic. The weather was good and likewise the company.  There was a variety of activities; cricket, ball games and Finska which U3A Wanneroo members excelled at.  A special mention to our star performer at Finska, Joyce Smith. When all looked lost she managed to hit the target from an almost hopeless position, and won the match. Maybe next year a trophy should be awarded to the most outstanding group on the day.
by Enid Smith

Wanneroo members enjoyed an excursion to visit the ancient Thrombolites in Yalgorup National Park, a morning tea at Cape Bouvard Winery and lunch at the Ravenswood Tavern on the banks of the Murray River. It was an awe- inspiring experience to be viewing 600-million-year-old Thrombolites from a boardwalk on a peaceful lake. These are among the oldest living organisms in the world. 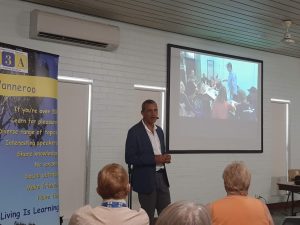 Our first meeting for 2021 was on Thursday the 14th of January.  The Wanneroo Recreation Centre was packed out for the much anticipated talk by Craig Challen about the 2018 Tham Luang Cave Rescue in Thailand.  Craig enthralled everyone with his account of the rescue with his cave diving colleague Dr Richard Harris.  Dr Harris is an anaesthetist and they developed the plan to sedate the boys and their coach so that a team of experienced cave divers guide could  them out of the cave.  In the end they were all rescued safely.  What an inspirational talk.

On the first Thursday in December, the last calendar event for the year, Wanneroo celebrated Christmas with lunch at the Bistro, Carine Glades Tavern.  28 of us sat down for lunch.  The event was a great success with excellent food and much camaraderie.  Jan, our Events person, was applauded for her excellent choice of venue.  Well wishes were extended for all in attendance and their families to have a safe and happy Festive Season.

Following the Wanneroo AGM on the 12th of November, a fun quiz was enjoyed by all.  The Quiz MC was Enid Smith and the judge was Mary Bracken. 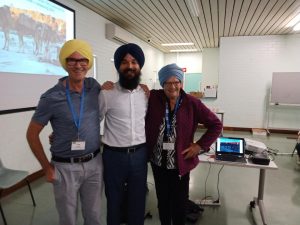 Wanneroo members were treated to a talk by Harjit Singh about the history and heritage of Australian Sikhs from the early 19th century to the present day.  He also demonstarted how to tie a turban on two of our members.  Clck HERE to see the video.

Wanneroo U3A members visited the Harry Perkins Medical Research Institute in Nedlands.  The “Perkins” is at the leading edge of medical research in areas including cancer, heart disease, diabetes and genetic diseases.

Wanneroo U3A members celebrated Xmas in July on the 4th of July at the Wanneroo Tavern.

About 38 Wanneroo and several North Coast members embarked on a “Mystery Tour” hosted by Chris and Scott from Club 55 Tours.  The tour left the Wanneroo Community Centre and headed south on the new Northlink freeway and Tonkin Highway until we stopped for morning tea at Wungong Dam.  Then a scenic tour of the hills followed, including a stop at Raeburn Orchards in Roleystone.  Lunch was at the John Forrest Tavern in the National Park.  All agreed that this mystery tour really was magical.

Wanneroo members visited Anzac Cottage in Mount Hawthorn on Wednesday the 10th of April. An informative talk was presented by Anne Chapple, a grand daughter of Private John Porter, the soldier wounded at Gallipoli whose family were given the house to live in.  We enjoyed morning tea in the backyard and then lunch at the Charles Hotel.

Wanneroo hosts the opening of the new petanque pitch

On the 15th of November 2018 the Mayor of the City of Wanneroo, Tracey Roberts, opened a new pétanque/bocce pitch next to the Wanneroo Community Centre in Scenic Drive.  Two members of U3A Wanneroo had taken the idea to construct this public sporting facility to a workshop hosted by the City of Wanneroo, where the object was making great community ideas happen in your local community. After seeking our region’s and community support, a petition was raised and presented to the City of Wanneroo Council with a formal submission to construct a pitch. Following their personal deputation to Council, the proposal and funding for the new facility was approved. U3A Wanneroo hosted the event to thank all those involved in the building of this facility which is used every month by U3A members.  Thanks are due to the Council of the Ageing (COTA) which provided a grant to fund the day and also to students from the Joseph Banks Secondary College who prepared and served tasty treats for all who attended.

U3A Wannerro visited the Army Museum in Fremantle on Wednesday the 15th of August 2018, followed by lunch on the river at the Dome Cafe in East Fremantle.  Members were guided by two of the museum volunteers who gave us very interesting and informative tours that were appreciated by all who attended.